With these attention-grabbing opening remarks, Clark Smith began a recent virtual tasting of six of his wines for attendees of the 2020 (Virtual) Wine Media Conference.

Smith has been called a maverick vintner, a wine industry provocateur, a blowhard, a technocrat, Dr. Frankenwine, and the anti-Christ of wine. Since 1976, when he made his first wine in his Oakland, California, basement, Smith has made wine from 58 vintages: 44 in the Northern Hemisphere and 14 in the Southern Hemisphere. The guiding principles of his wines are balance, palate energy, low alcohol, structural integrity, and longevity. Smith’s wines are rarely over 14% alcohol. Of the six wines we tasted, the highest alcohol percentage was in the Cabernet Franc, at 13.5%. Generally, he does not filter his red wines. 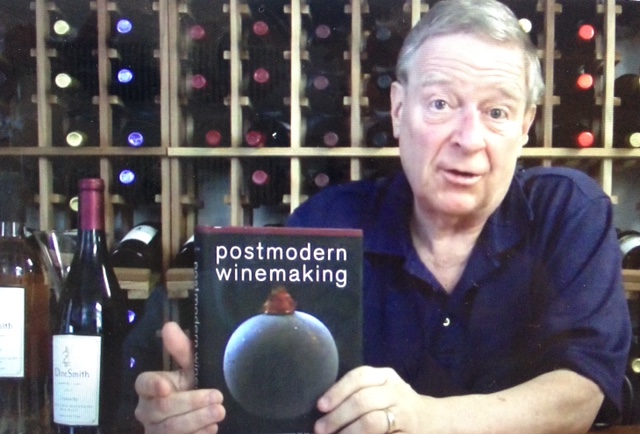 So how, exactly, does Smith manipulate his wines? The technologies he uses, some of which he invented and patented, are detailed in his book Postmodern Winemaking: Rethinking the Modern Science of an Ancient Craft (University of California Press, 2013), which was Wine & Spirits magazine’s 2013 Book of the Year. Two of his tools are:

In the 1990s, Smith founded a company called Vinovation to commercialize the use of reverse osmosis, MOx, ultrafiltration, processes using high-quality oak chips, and other new tools. Vinovation offered its services to winemakers, and “Vinovation and its global partners quickly became the largest wine consulting company in the world, and we did service for thousands and thousands of wineries all over the world,” Smith said.

Smith has received a lot of flak over the years for his innovations and tools, which some feel do evil to the wine by taking the terroir out of it and erasing all traces of the character of the vintage and the grapes. Unlike many in the wine world, he does not take a dim view of the word manipulation; he does not consider it an act of artful deceit. According to Smith, no one objects to technologies and tools of modern winemaking such as stainless steel, electricity, and refrigeration because we have those things in our kitchens and we’re comfortable with them. In cooking, to which Smith likens winemaking, no one objects when top chefs openly use tools and technologies such as sous vide, liquid nitrogen for freezing, puff technology, and machines to conch chocolate.

Smith feels that using the winemaking technologies at his disposal actually helps him do a better job of allowing his wines to express their terroir. He starts with grapes grown in living soil—“the enhanced mineral uptake gives the wine a healthier immune system.” He then uses MOx and dealcoholization judiciously (sometimes he doesn’t use dealcoholization at all) to achieve the refined structure he seeks. “I work with the tannin until it integrates the aromas which the natural microbes impart into a single ‘voice,’ so they will occur as soulful rather than spoiled.” For him, that aspiration and way of working is very different from a winemaker who uses Mega Purple, stave wood, and excess MOx to speed up the aging process in order to bring the wine to market faster.

“The foundation of my brand is total honesty and transparency,” Smith says. “I’m never going to do anything with my wines that I’m not proud to brag about.”

2017 Brut Zero Sparkling Grenache Blanc de Noirs. Santa Cruz Mountains. Disgorged after 13 months on the yeast; no dosage. Alc. 12.5%. This méthode champenoise sparkling wine has aromas of strawberries and melon and is very clean and fresh tasting, with minerality in the finish from the limestone soils. To my palate (and esophagus), it is a brut zero that’s rich and round with no need for additional sugar to tamp down excess acidity.

2015 Saint Laurent. Ricci Vineyard, Carneros. Alc. 11.8%. This aromatic dark-skinned grape grows in very tight clusters and needs the dry air and UV of high altitudes to suppress mold. Widely planted in the Czech Republic and Austria, it claims Pinot Noir as one of its parents. The wine is bright, very soft, and delicious; it has an herbal character with nice acidity and rounded tannins. Smith highly recommends pairing this wine with seafood, sushi, and paella. Give it a bit of a chill. This is the only wine in the six we tasted on which a technology called flash détente was used to denature rot and enzymes and pull off pyrazines.

2018 Norton. Heringer Estate Vineyards, Clarksburg, Yolo County. Alc. 12.9%. 100% Norton. Only 58 cases produced. Clarksburg, on the Sacramento River in California’s Central Valley, has long, warm summers that are perfect for fully ripening Norton grapes. Smith thinks that Heringer is the only Norton vineyard in the state. This juicy, deeply flavorful wine is an intense purple color (complemented by a mauve foil on the bottle), dense and soft and tasting of blueberry pie.

2015 Cabernet Franc. Lake County. Alc. 13.5%. Smith has been making Cabernet Franc in about ten locations all around the state since 1993. This wine is 78% Cabernet Franc and was cofermented with 22% Merlot for roundness. MOx was used right after fermentation. The wine spent 66 months in neutral French oak to reduce the reductive character. I detected cinnamon and tobacco on the nose but no bell pepper; the tannins are soft. The rocky volcanic soils of Diamond Ridge, where the grapes grow, transmit a mineral energy.

2014 Meritage. Ishi Pishi Vineyard, Humboldt County. Alc. 12.8%. This wine is a field blend of organically grown grapes from northern Humboldt County: 61% Merlot, 19% Cabernet Sauvignon, 12% Petit Verdot, 5% Malbec, and 3% Cabernet Franc. Vinified without added sulfites. The wine spent 57 months in 20-year-old neutral French oak, yet it is still fresh and purple, dense and rich. You can drink this wine now (consider decanting it and letting it sit; it needs air, as it’s still quite reductive); it will also benefit from a decade of further aging.

In an email exchange about this wine after the tasting, and in an attempt to understand more about how MOx works, I asked Smith whether using more MOx during vinification would have resolved the reduction in the Meritage. He replied, “It is true that I could have ‘quenched’ the wine with a longer regimen of oxygen and sawed many years off its development potential in service to current drinkability, but there are plenty of wines out there that do just that, and I’m exploring what I feel are more noble options.”

2017/2018 Petit Manseng. Novavine Nursery Vineyard, Yolo County. Alc. 12.9%. 100% Petit Manseng. 375 mL bottle. This is a delicate, aromatically delicious, and very refreshing dessert wine. Because it retains its acidity, it is not in the least syrupy or cloying. It would pair well with lighter desserts such as Napoleon, cannoli, and strawberry shortcake. Smith’s tasting sheet includes the information that aromatic Acacia wood chips were added to the fermentation to impart a honeysuckle element to the nose and some tannin structure. In a sort-of solera system, two-thirds of a given year’s wine is bottled and the rest returned to barrel for increased complexity of aging until it is blended into the wine of the following year.

Where Can I Buy the Wines?

WineSmith wines can be purchased direct on the website. Smith is selling the six wines we tasted in a Postmodern Select Six Sampler at a 36% discount. To order, go to WhoIsClarkSmith.com and click on Shop. Mixed cases qualify for discounts too, and Smith offers free cellaring.

What New Projects Is Smith Working On?

Other wine writers have pointed out that the technologies Smith uses can be viewed simply as more automated and high-tech versions of long-used techniques to “improve” or “correct” wine such as racking and chaptalization. To my mind, those practices, whether the high-tech or low-tech versions, are infinitely more benign than spraying the grapes with synthetic herbicides and pesticides, using colorants and other chemical additives in the winery, and using commercial yeast strains during vinification to create artificial aromatics and flavors.

Smith is forthcoming about how he makes his wines. In our culture we have the notion, encouraged by corporate marketing departments, perhaps, that wine is or should be an artisanal product, free of manipulation by technology. But that kind of marketing leads to deception, probably making winemakers feel they can’t be transparent about their methods. How many winemakers’ websites have you looked at that emphasize their low-interventionist approach, their desire to express the vineyard site’s soil and climate in their wines, their belief that wine is made in the vineyard? How many of those winemakers use MOx and dealcoholization in the winery? Can a winemaker express a sense of place and vintage and use the industrial tools thoughtfully to that end? Smith would say yes.

If these practices are as widespread in the global wine industry as Smith says, then unless we drink so-called natural wines (but even then . . . one can argue that hand-crafted wines, too, are manipulated in that every decision a winemaker makes can be viewed as a manipulation), we are drinking manipulated wines. It is still not mandatory for winemakers to list the ingredients in their wines on the label, much less to describe how the wine was made.

I don’t necessarily object to drinking a wine that has been minimally “adjusted” or “intervened with” in some way, but to wine marketers and winemakers I say: Just be honest with me about what’s in my glass!